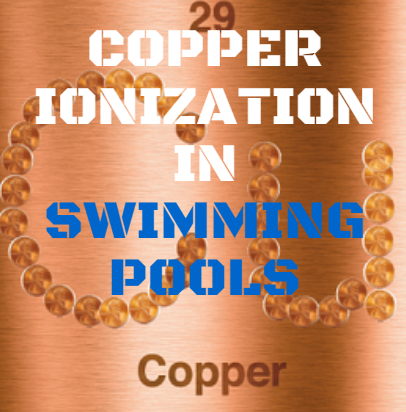 Copper ionization in swimming pools is becoming a more and more commonly used technique that pool owners use to keep their pools clear. Why? Well, because it actually works and its more desirable than using large amounts of chemicals.

Why Copper Ionization Is Used?

Copper ionization can be used as somewhat of a substitute for chlorine use. Although you should still use some chlorine, using an ionizer can reduce your chlorine dependence by up to 80%.

No matter what type of pool ionizer you have, they all are build similarly and use the same process.

They have an electrode anode that is submerged beneath the water. This anode is made of copper (mainly) and it is where the ions come from.

To explain it briefly, through the process of electrolysis an electrical charge is transmitted down through the electrode and this leads to copper ions being discharged into the water.

This ionization technology’s effectiveness is well documented. Copper’s antimicrobial properties have been proven in many scientific studies.

And as I mentioned above, copper ionization can decrease your chlorine dependence by 80%. Why? Well, simply because your pool will be clear and you will not need to use chlorine to keep it clear.

Ok, so all of this “killing microbe” might concern you some, because you are going to be swimming in this water filled with copper ions.

But it is completely harmless if used correctly. In fact, its much less harmful than the commonly used amounts of chlorine that pool owners use.

However, take not that I say “if used correctly”. Because you can run into problems with this ionization technique, mainly from overuse in which there would be too many ions produced and floating around your pool. I have already written an article on this called Pool Ionizer Problems, which you can read.

Don’t get worried about overuse. The ionization process that goes on with pool ionizers is very slow and easy to control.

And just to give you an idea of how safe copper ionization actually is. Think about this: Copper ionization has been used for years as a way to disinfect and make drinking water safe.

Should You Use Ionizers In Your Pool?

Every pool owner can benefit from the use of ionizers because everyone is constantly trying to keep their pools clean and clear.

And the great thing about pool ionizers is that they can save you money, mainly by reducing your need for chlorine so much. And by reducing your chlorine use they also spare you the side effects of chorline, which include but are not limited to: stinging eyes and fading clothes.

Overall, pool ionizers are a much friendlier way to keep your pool clear.

But You Still Have To Use Some Chlorine

Don’t think that ionization will completely replace your need for chlorine.

While copper ionization is awesome and can get rid of all sorts of things, from algae, to bacteria, to fungi. Its not the complete package.

There are still some things that you will need chlorine to get rid of. And these are things like bodily fluids, sun screen, etc.

What Are Some Good Pool Ionizers?

Of course I am all about “solar” products, so I recommend solar pool ionizers. They are eco-friendly and can save you additional money because you don’t have to pay to power them.

I have a Solar Pool Ionizer Reviews page that you can check out. I go over the details of the different ionizers available so that pool owners can better choose whats their best choice.

We Help You Save Money In An Environmentally Friendly Way!​

Get notified of awesome product deals we find as well as important pool owner tips!

Iconic One Theme | Powered by Wordpress